Who They Are
A progressive-leaning, member-supported digitally native news site in Spain
Location
Madrid, Spain
Founded
2012

By 2017, five years after its launch, El Diario realized that the technology underpinning its membership program was holding it back. It needed a system that enabled it to connect users across its website, its payment systems, and its email service provider.

The team began looking for options on the market, but it was unable to find an existing product on the market. So, it decided to build its own system.

With funding from Google’s Digital News Innovation Fund, El Diario partnered with a local tech firm to create BrainHub, which is centered around four key elements: “community, intelligence, engagement, and data.” (The Membership Guide is also supported by the Google News Initiative.)

By the time El Diario decided to create its own system, it was in a bind: Its existing technology was difficult to use and hampering its ability to grow and expand its membership program.

If you realize that there’s nothing existing out there that can meet your needs, and it is critical to your membership business, it may be worthwhile to invest in creating your own tool. However, you should be aware that building your own software comes with a considerable, and ongoing, investment of money and resources.

For El Diario, where membership now brings in more revenue than advertising, it was a worthwhile tradeoff.

“Ideally it’s better to buy something,” said María Ramírez, El Diario’s chief strategy officer. “It takes so much time and if you don’t have funding it’s quite expensive [to build from scratch]. But if there’s nothing, and at the same time it’s a tool you really need to manage subscribers, if you have the money it’s painful, but it’s an investment you really need.”

MPP offers this case study as an example of how one newsroom decided to make the investment, and what they learned from the process.

In 2017 and 2018, El Diario received funding from the Google News Initiative to build out the system.

A comprehensive journalism funding system that understands its audience’s behavior patterns and engages with their interests, inviting niche groups of readers to fund a specific story or topic. A platform for new media wanting to build sustainability based on crowdfunding campaigns and communities of readers with four dimensions: community, intelligence, engagement, and data.

The initiative totally revamped the back end of El Diario’s systems.

“One of the things we spent time doing was the connections,” Ramírez said, noting that its CRM now connects to Mailchimp, its email service provider.

The system is a database of all El Diario’s members, and it gives it real-time information on membership data, including daily new sign-ups, cancellations and the reasons why members cancel.

It also tracks renewal failures and a stat the site calls “change of mind,” which is people who have previously asked to cancel their membership but changed their mind. Pop-up banners and membership marketing campaigns are also run through the system.

For members, the biggest difference was a website redesign that featured a new logo, updated fonts, and a revamped mobile presentation, along with other features.

One of the benefits of El Diario’s membership program is that members do not see any advertisements on the website. One of the keys of the site redesign was to make that experience better for members:

“Until now this simply consisted of blank spaces appearing, on the cover and in the articles, in the places on our website where readers find the ads,” editor Ignacio Escolar wrote in a note to readers. “Now our [members] will have access to a new version of elDiario.es that is more comfortable to read; without advertising, as before, but with a different layout that takes advantage of these spaces to facilitate reading” 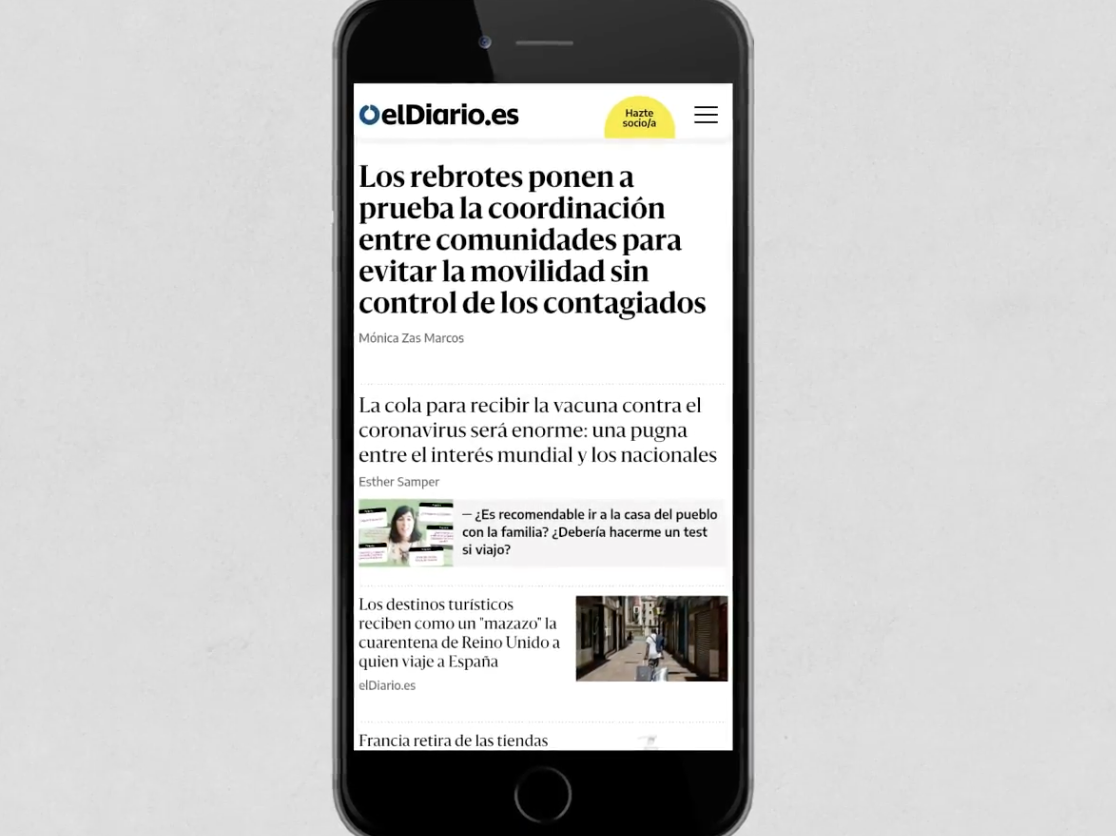 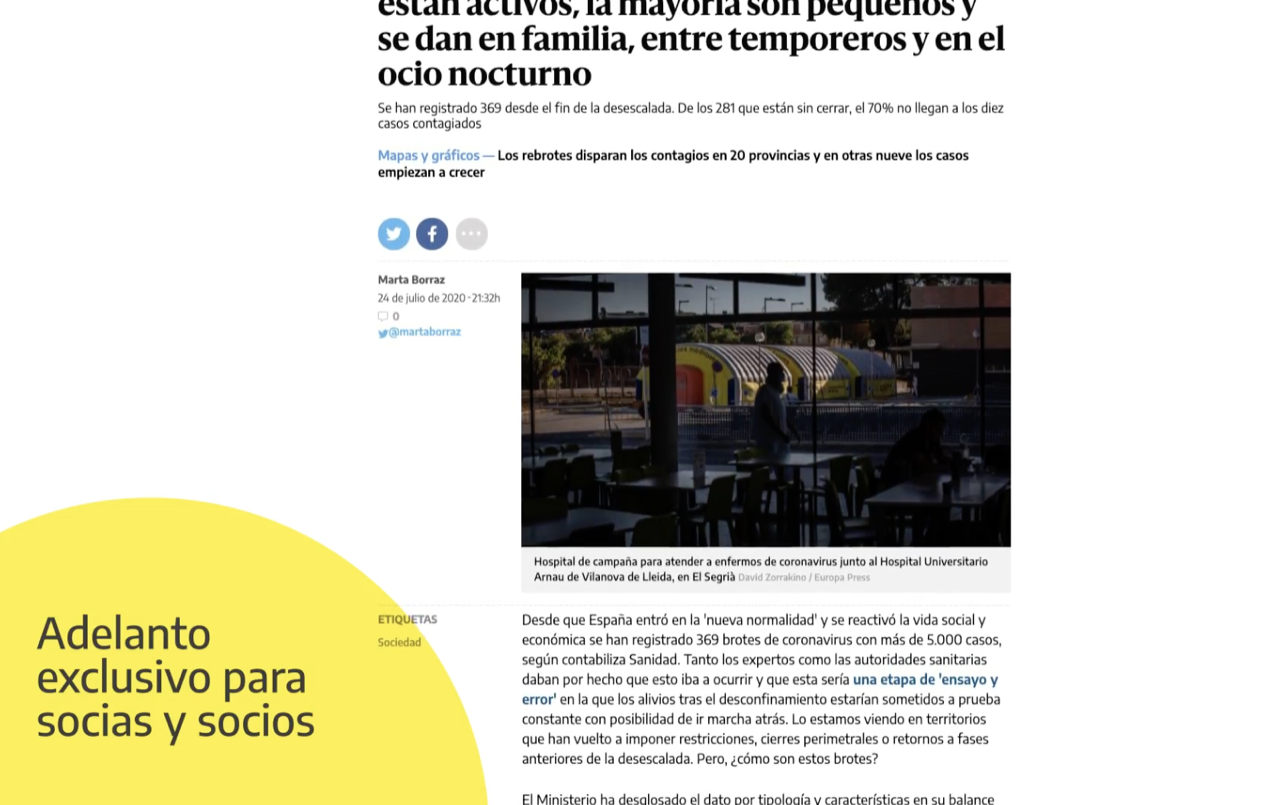 For staff, the main change is how much better its access is to data on its members. El Diario’s next step will be to offer more options for payments by improving the checkout interface and accepting additional currencies.

Be patient. These projects tend to take longer than expected and can go over budget. El Diario received  91,749 euros in 2017 and 166,554 euros in 2018 from Google for the project, but it still had to invest some of its own money to finish the job. Ramirez said it was still too soon to say how much El Diario is going to spend above the Google funding. The new CRM was supposed to be ready in summer 2019, but it finally launched in July 2020. El Diario went through multiple teams working on the project as well.

“It’s been a year and a half at least, and it’s not even ready with the things we want to do,” Ramírez said when MPP spoke to her prior to its launch.

If you’re going to undertake a massive project such as this one, be prepared for delays and be patient.

But there might be a business opportunity on the other side. Now that the process is complete, El Diario is contemplating whether it has an opportunity to whitelabel the system to other membership-focused organizations. If you’re going to build a new system, this could be a good revenue booster as well. “Maybe El Diario will finally be the company to sell it to everyone who avoids doing this horrible thing,” she said.

Building your own tool is a huge decision. It’s cheaper and less labor intensive to utilize existing tools to support your membership program, but if there truly are no tools that meet your needs, it could then be worthwhile to invest in building your own.

The development process, however, can be long and expensive. It’s also easy to miss deadlines and go over budgets as use cases change. You should also be prepared to budget for maintaining the systems once they’re completed.

However, building your own systems opens up new revenue potential as you could potentially license it to other organizations.

Editor’s note: This case study was updated after publication to accurately reflect what type of software El Diario developed.