In just two years, Michigan’s Bridge Michigan increased reader donations by 66%, increased the number of monthly donors by 54%, and grew its email list by 114% by enacting strategies.

Bridge did this by running a series of targeted experiments at each level of the audience funnel. It set clear goals and targets for how it would define success at each level, and then enacted strategies around SEO, email newsletter growth, and more to meet those goals.

Bridge Michigan’s strategies weren’t revolutionary. They were simple and straightforward. By focusing on bite-size tests focused on audience growth through SEO and audience habituation through email newsletters, Bridge was able to turn small, individual successes into a larger strategic win through increased revenue and increased membership.

Newsrooms looking to implement test-and-learn strategies for membership should start by focusing on small experiments.

“You don’t need every unique visitor to give you money, but you need to find ways to get people to do that at each level,” Bridge Michigan’s growth strategist Bill Emkow said during a presentation at ONA19 in partnership with the Facebook Journalism Project. Bridge was a participant in the 2019 Facebook Membership Accelerator. (The Lenfest Institute partners with Facebook to administer the program and share best practices from its participants.)

Bridge entered the Facebook Journalism Project’s Accelerator Program with some financial support from readers, but no formal strategy for growing its membership program.

The first thing Bridge Michigan had to do was define its audience funnel. Broadly, a funnel stars with occasional users and filters down to regular users and ultimately contributors.

Here’s how Bridge defined its funnel based on its reader habits and audience analytics:

Underpinning every stage of the funnel is regular publication of high-quality coverage. Bridge publishes about 3-5 news stories per weekday. Here’s a breakdown of Bridge’s strategy at each level:

At this stage, Bridge focused on SEO-friendly headlines that could get their stories in front of new audiences.

“The most effective way to build the unique visitor base is by having more stories and more posts on the topics the audience cares about,” Emkow said.

The next step is getting unique visitors to come back at least five times a month.

Bridge pays close attention to its audience analytics, and if it recognizes that a particular topic is attracting a consistent audience, it will double down on that coverage. Emkow uses Google Search Console to identify which search terms are leading people to Bridge. He sends a weekly memo to the staff with the specific terms readers are using to reach the site via search.

In 2018, Michigan voters legalized recreational marijuana. Bridge noticed that the topic began trending on Google and attracting social media attention the next year, as the law was about to go into effect.

So Bridge increased its coverage and then optimized past coverage for SEO as well. The site assigned one of its politics reporters to dive into marijuana.

FJP’s David Grant explained how they did it:

Following SEO best practices, they linked every new marijuana story to old marijuana stories and wrote keyword-rich page titles and headlines. In the article below, notice how (circled in red) there’s a list of previously published stories before you start reading the article itself. The story’s first sentence includes the term “marijuana in Michigan.” The entire story is optimized for SEO. 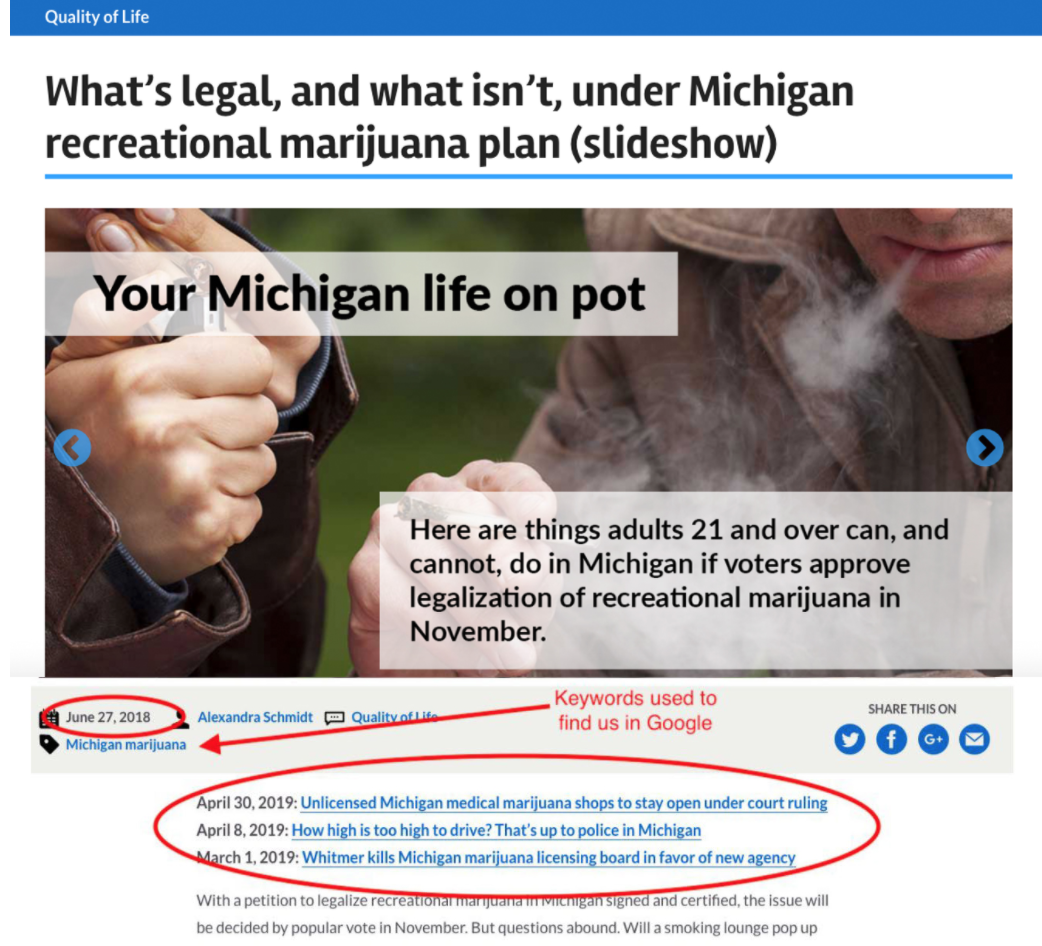 However, a handful of their stories didn’t generate much readership, so the team assumed the topic was dead.

Though Emkow argues that they ultimately pulled coverage too soon.

“I argue that we just had three stories that didn’t connect,” he said over email. “We should’ve kept chipping away, IMHO. I think that lessons we learned from marijuana were applied during coronavirus. We just keep hammering away, and we’ve been rewarded by readers.”

Email is a powerful tool for developing habit with readers, a prerequisite for converting them to members.

“It’s letting you into their lives more,” Emkow said. “Once they let you in, you can have a conversation with them.”

Bridge has a daily newsletter, and it encourages readers to sign up with non-intrusive sliders that pop-up after the reader has spent a few seconds on the page. It has also added a week-in-review newsletter and RSS-automated health and environment newsletters that are sent automatically the day after the site publishes a story on that topic.

Bridge tweaks the language on the email calls-to-action depending on the source of where the reader is coming from, or the news of the moment. It previously targeted CTAs to a reader who clicked on a link via Facebook with an email sign up encouraging them to become less reliant on the social giant’s algorithms while someone who came by typing bridgemi.com into their browser will get a more general CTA.

The lefthand image is a message for a reader who arrived at Bridge after typing it into their browser. On the right is a visitor who arrived via Facebook.

Tools such as OptInMonster, which Bridge Michigan uses to power its lead generation, offer A/B testing capabilities, so you can test out different calls to action to see which is most effective based on.

Your owned-and-operated platforms, such as your website, are the most important place to ask for donations. Bridge made the donation button more prominent and added a stronger call-to-action.

It also added pop-ups to news stories and modules at the bottom of articles that encourage support. By seeing how users respond to these different call-outs, Bridge has been able to grow its donations.

Most Bridge readers only read one story, so Bridge has three different CTAs per story to encourage membership.

“Yes, be mission oriented, but to create sustainability be conversion oriented,” Emkow told me in an email. “To paraphrase Eminem, if you have only one shot to turn a casual reader into a paying member, what do you do?”

Bridge realized that its donations page was not set up to encourage recurring contributions even though its ultimate goal was  to encourage one-time donors to contribute on a recurring basis and provide stable, predictable revenue. So they defaulted their donation pages to a monthly ask.

Griggs suggested Bridge Michigan make their default $15 per month, $10 as a second option, and any amount as a third. “It worked,” Emkow says. “We saw an immediate increase in overall monthly donations, but specifically $10 and $15 per month.”

Setting defaults is essential — you need to tell your audience what you want from them.

“A blank field leads to confusion,” Emkow said via email. ‘How much should I give? How much do they want? What’s a lot, what’s too little?’ Eliminate confusion. The $15/month suggestion was basic behavior economics: people tend to choose the default, but the second most popular option is the second-highest price option.”

Bridge has also started re-sending fundraising emails to readers who didn’t open them. It started as a small experiment: Two days after sending a fundraising email it sent it again, and it made nearly the same amount as the first email.

A quick note: Though many news organizations, including Bridge Michigan, use donations and membership interchangeably, we consider them two distinct engagement and revenue models with different relationships between supporters and the newsrooms

Bridge has seen growth at every stage of the audience funnel.

In 2019, toward the top of the funnel, these strategies grew its overall unique users by 35 percent to 2.4 million and its email subscribers skyrocketed by 59 percent to 13,374.

Emkow also recently launched a Facebook lead gen campaign to attract new email addresses. The ad targeted users who were similar to Bridge’s most loyal email subscribers and who resided in Michigan, the site’s target audience. It used an image from its COVID-19 tracker, and removed the words and numbers because Facebook dings images that are text heavy.

Keep track of costs. Facebook can be a valuable lead-generation tool — but the juice has to be worth the squeeze. Emkow said he’ll boost posts or use Facebook’s email lead generation tool, and then meticulously watch costs to make sure that they are staying below targeted CPAs.

You don’t need to be an analytics expert.: Emkow is the first to admit that he’s not an expert at Google Analytics. While there are many sophisticated analytics tools, Emkow was able to glean insights by look at each level of the funnel individually and then seeing how they correlated. For example, he’d look first at overall traffic levels and then at the number of email newsletter subscribers. If he saw growth in both categories, then it would be safe to assume that readers were moving down the audience engagement funnel.

“I’m just looking at correlations. If you’re seeing big growth in one spot and not correlating growth in other spots, there’s something you need to check out,” Emkow said.

Pick your spots. Most membership-driven newsrooms, including Bridge, have limited resources. The site uses a combination of editorial judgment and its analytics insights to make decisions about what to test and which areas to focus on that will move its audience down the funnel. Newsrooms should

“Be the authority on certain topics that matter to both your audience and your editorial judgment,” Emkow said.

• Put user experience first. You don’t want to overwhelm your audience, and you should be careful about how intrusive your CTAs are. Let the data be your guide. For example, Bridge noticed that its conversion rate on on-site email pop-ups didn’t change when it changed its frequency from every one day to every three days. So users saw the pop-ups less, and Bridge still was able to grow its email list.

Focus on each step of the funnel. By breaking its strategy down by steps in the funnel, Bridge was able to run concentrated experiments that focused on growing its overall audience and increasing its email list, which ultimately moved the needle on Bridge’s overall goal — growing its membership base.

By keeping its experiments small and manageable, Bridge was able to make incremental progress that ultimately resulted in significant growth.

Let the data guide you: It’s important to be data literate and understand what your audience analytics are telling you, but membership-driven publications need to have strong values and editorial judgement. Don’t let the data lead you to pursue audiences and stories that aren’t in line with the core membership value proposition.