Who They Are
A Dutch member-driven news organization that brings context to the news by rejecting the daily news cycle and collaborating with their readers.
Location
Amsterdam, The Netherlands
Founded
2013
Launched membership
2013
Monthly unique visitors
550,000
Number of members
69,340
Percentage of revenue from membership
53.8 percent*

De Correspondent staff participated in the interviews and were the stakeholders for the resulting synthesis. Three years later, MPP asked the membership and editorial staff what insights from that exercise have “stuck.”

*95 percent of De Correspondent’s revenue came from readers in 2019. The remainder came from book sales and donations.

What works for your members during Year One of your membership program may no longer work quite as well a few years later. The most successful member-driven organizations have a strong capacity to flex, and are continually gathering formal and informal feedback on how they should adapt as their membership base grows and changes.

Many organizations undertake a rigorous audience research process before launching their membership program, then “set it and forget it.” The process undertaken by De Correspondent offers a blueprint for evaluating the strengths and weaknesses of your membership program when it’s no longer brand new.

De Correspondent published a call for member research participants (language here) and, together with the Membership Puzzle Project team, selected 30 people from those who submitted information about themselves. The teams worked to be thorough in engaging the voices of people who:

Participating members then scheduled time based on their availability and location. All responded to the same questions (included at the end of this document) whether they were interviewed individually or in longer-running sessions with groups of eight members.

Immediately following each conversation, staff who facilitated and observed the sessions from MPP and De Correspondent listed what they’d learned that was a confirmation or a surprise for them, an exercise that is detailed in step #14 of this Poytner article. The MPP team then undertook a deeper note review and theme mapping that culminated in an end-of-listening-week presentation to De Correspondent staff.

Through the interviews, De Correspondent gained the following insights:

Members want to support De Correspondent, not just use the product. Chief Engagement & Campaign Leader Lena Bril, who took part in the original 2017 member interviews, said, “Overall it was a fantastic way to hear that our ideals resonated with our members… Almost all insights have become part of our DNA. The insight that members want to support us, not just use the product, is important.”

Constantly communicate what your organization stands for. Mayke Blok, Membership Strategist at De Correspondent and its English language sister publication The Correspondent, said, “I think what we learned from conducting those interviews was how well informed our Dutch members are about the principles and our mission and how important it is to continuously communicate what we stand for to our members.”

“We do this by looking at our member data, conducting more surveys and trying to communicate the wishes and desires of our members to the rest of the organization. I think this helped to make all parts of the organization, ranging from editorial to development, more aware of how our members view our journalism and what they like and dislike” beyond the initial interview research, Blok said. (Jump to MPP’s case study on their commitment to collecting minimal data for more on that.)

The research insights weren’t all positive, but Blok said the process of gathering insights was useful: “It showed how perfectly members could pinpoint flaws within the organization and how valuable their opinion is to avoid blind spots in how we operate.”

Show different approaches to correspondents’ beats: “One of the most useful lessons was that our members really appreciate it when we show that we disagree with each other. Since the interviews we highlight that more often on our platform and in our newsletters,” Bril said.

In recent practice this has involved publishing the different perspectives of two climate correspondents, Eric Holthaus (who is somewhat pessimistic about the possibility of what can be done about climate change) and Jelmer Mommers (who often writes about how humans can incite change while there is still hope for the planet), and the conversations between them. Other examples include De Correspondent’s economics correspondent Jesse Frederik and education correspondent Johannes Visser discussing whether market forces have an influence on education and Frederik debating economics correspondent Rutger Bregman about lazy argumentation on this podcast.

Invite members to pay more than membership costs: Bril said the insight that many members would be open to and feel validated in paying more for De Correspondent’s journalism has been and continues to be useful. One example of how they’ve made it actionable is in setting up a new foundation to make it easy for individuals and institutions to donate beyond the annual membership fee. When staff shared the idea of creating this new Correspondent Foundation with members, they did so by inviting members to “think along” with staff about the shape such an organization might take and encouraged members to consider applying for a volunteer position at the nascent foundation.

Make surveying members a part of regular engagement: Sending digital surveys to members is now a regular, albeit time-consuming, activity. New members are sent surveys about their expectations within 30 days of joining De Correspondent, then surveyed about their experiences approximately quarterly (with questions requesting reactions to editorial style and what changes they would want to see on the platform) and again as their annual renewal date approaches. Beyond those inputs, “it would be advantageous to go through the process with a moderator or external researcher again,” said Bril about embarking on a larger listening tour.

Through active listening, your organization can learn what your current and prospective members value most. Members don’t pay De Correspondent for digital access. They pay to contribute to what they consider to be a public good. De Correspondent cofounder and CEO Ernst Pfauth said that, following the 2017 member interviews, he’s found himself repeating the insight about what makes a De Correspondent membership most worth retaining to those who have them. “They appreciate the constructive aspect of what we’re doing,” Pfauth. He says the process of getting to know members better has been “like therapy” for the organization. 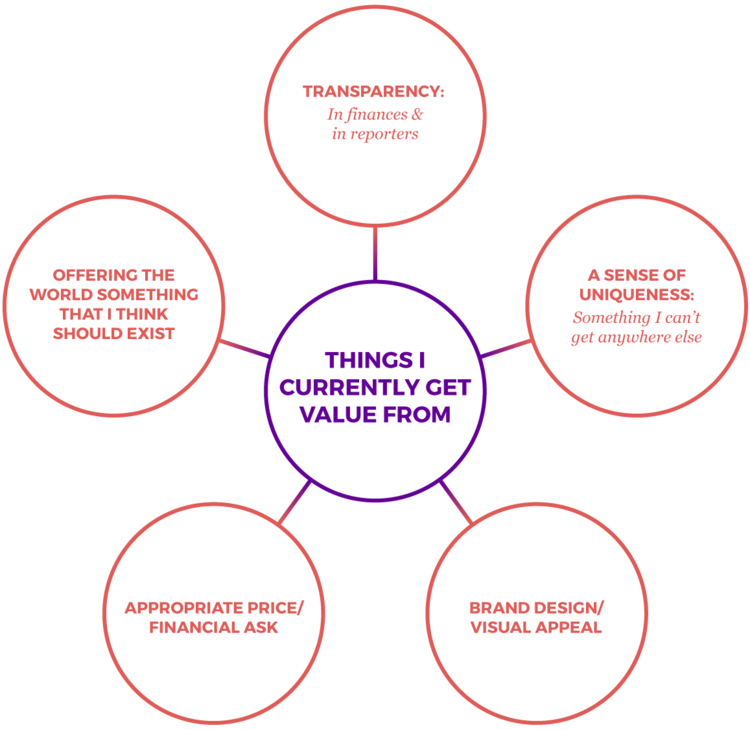